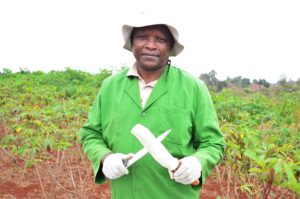 After years of meticulous research, the Kenya Agricultural and Livestock Research Organization (KALRO) is seeking approval from the National Biosafety Authority to introduce a genetically modified cassava.

The cassava line 4046 protects cassava from the devastating Cassava Brown Streak Disease (CBSD).  KALRO cassava breeders have already begun working to develop new farmer-preferred varieties for different regions using this CBSD resistant cassava line in regulated confined field trials. After government regulatory approval, these CBSD resistant cassava varieties will be a major boost to the livelihoods of thousands of Kenyan farmers and probably millions of consumers. For the majority of Kenyan families, the top priority is food security.

As an agricultural scientist, this has also been the driving force for my career.

Nothing gratifies me more than the knowledge that I have contributed to actualizing the dreams of an average Kenyan, which is providing for their family’s food security needs. I am eagerly waiting for the day that our farmers will be growing the CBSD resistant cassava.

For some people, it is their main source of energy particularly in western Kenya where 60% of the cassava is grown or in the Kenyan coast where 30% of the cassava is grown.  For the majority of urban and peri-urban Kenyans like me, we either take it for breakfast or as a snack whenever we manage to get it from our neighborhood vegetable vendor in the estate or the supermarket.

However most of the time it is not available.  Though Kenyan farmers continue to grow cassava every year their efforts are frustrated by heavy yield losses due to the CBSD which is capable of reducing cassava root yield by up to 100%. Farmers end up with rotten roots that are neither suitable for human nor livestock consumption.

KALRO’s improved CBSD resistant varieties are therefore a welcome boost for our farmers since it will guarantee food for the farm families.

Farmers will also improve their incomes by selling surplus cassava in local markets and towns whose population is gradually increasing due to new opportunities arising from the devolution of government services.  At the national level, there is also the potential for complementing the pressure on cereal grains which are currently facing major challenges.  For me and other agriculturists, the cultivation of these disease-resistant varieties will be a major milestone that will open up a new chapter of cassava cultivation in Kenya.

The Kenya Government has identified manufacturing as one of the four pillars that will drive this country’s future development agenda. The proposed policy on the blending of wheat flour with other crops including cassava will stimulate demand for cassava roots.  This will also boost community-based small industries that have demonstrated the ability to improve incomes and create jobs at the community level.

Successful examples of these community-level processing activities have come up in several counties like Busia and Kitui where Tangakona Commercial Village and Kitui Cassava Processors are shining examples. Countries in West Africa, South America, and Asia have been able to make great progress using cassava for industrialization through the manufacture of products like animal feed and ethanol. Zambia is currently developing sanitizers using ethanol from cassava.

As any cassava farmer will tell you, to produce a good cassava crop he or she needs to plant high-quality planting material and at the right time.

The CBSD resistant varieties will guarantee farmers of high-quality planting material with all the important quality characteristics they need, including high dry matter and good plant characteristics that can allow them to intercrop their cassava with other crops like maize and beans. Farmers’ problems of spreading diseases through the planting of diseased cuttings and declining yields will be resolved by these varieties with CBSD resistance.

Personally, as a small scale farmer, I always look for technologies that will minimize my costs.  The CBSD resistant cassava varieties will have no additional cost to the farmer since this technology has been developed as a public good with no extra costs to the users.

Besides farmers do not need any new management skills or inputs to grow the disease-resistant varieties. They will continue to use current cassava cultivation standard recommendations which most farmers in Kenya are familiar with. And to crown it all, production and distribution of the planting materials of the CBSD resistant varieties will follow the existing improved cassava seed system in Kenya. KALRO will produce and multiply the basic planting material which will then be made available to institutions, NGOs, CBOs, and farmers with experience in multiplication and distribution of improved cassava planting material.  The Ministry of Agriculture is fully involved in this process at the national and county levels.

For these improved CBSD resistant cassava varieties to be planted by the Kenyan farmers,  regulatory processes established by the Kenya Government for variety development, release, and cultivation have to be accomplished.

The NBA is currently assessing the CBSD resistant cassava line for food, feed, and environmental safety. The NBA is a fully-fledged government agency with the responsibility of managing the safe use of biotechnology developed products in Kenya and collaborates with other relevant regulatory agencies in Kenya.  KALRO, where I worked for several years as a scientist, is a reputable national institution with highly trained cassava scientists.  These scientists have researched in their laboratories, greenhouses, and fields and found the cassava to be safe for food feed and environment. All these trials were done with the approval and supervision of the NBA and other relevant Kenyan regulatory agencies.

Following approval of the CBSD cassava line for open cultivation, Kenyan cassava breeders will be able to complete the breeding process and come up with region-specific CBSD resistant varieties that have all the farmers and consumer-preferred characteristics. Initial breeding has been going on under confinement at KARLO Mtwapa and Alupe Centers. The breeders in collaboration with Kenya Plant Health Inspectorate Service (KEPHIS) will evaluate the varieties in multiple locations in Kenya and select the best varieties for distribution to farmers.

I believe all cassava farmers and consumers like me are looking forward to the day when these CBSD resistant cassava varieties will be cultivated in our farms.

The NBA has now made it possible for all of us to support this process by submitting our views through the different avenues they have indicated.* Let us not waste this opportunity to turn round cassava production and utilization in Kenya.

To submit your comments, you can either:

Fill the attached form titled “Cassava Public Participation Form” and submit it to the NBA through the email ercassava2020@biosafetykenya.go.ke, or by taking a photo of the filled form and sending a clear image to 0713854132.

If you prefer to fill an online google form, click on this link to submit your comments.

Alternatively, using the convenience of your phone, send your name and county to the SMS code 40059 and ensure you include a comma after your name. For example: Jane Doe, Nyamira. Follow the instructions until you get a thank you notification at the end. You can also submit your comments via voice by dialing 0711082456. SMS and voice options have an option for Swahili.

Dr. Simon Gichuki is an Agricultural Science and Biosafety Consultant. He is a Senior Advisor in the VIRCA Plus project. You can reach him on stgichu2014@gmail.com